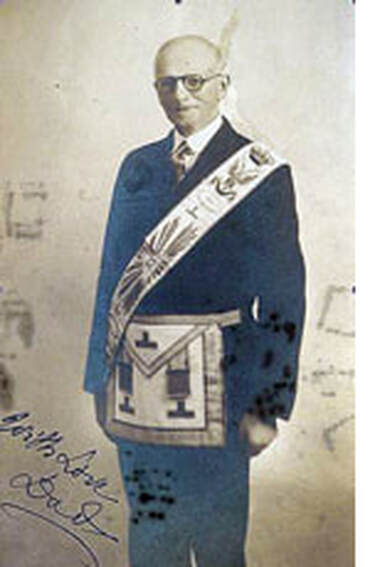 Francois Louis Goaziou came to America from France and found work in the Pennsylvania coal mines. In 1897 he started a monthly French newspaper, which he edited and printed himself. In 1902 this paper began to appear weekly and attracted the attention of a Professor of French at Columbia University of New York City, Antoine Muzzarelli.
​
Mr. Muzzarelli was a member of Lodge L’Atlantide of the Grand Orient of France in New York City, but was also interested in the newly organized Droit Humain Order, and was a member of the Supreme Council of the Ancient York Rite, of which he was a delegate for the State of New York. He corresponded with Bro. Goaziou for about a year about the possibility of forming a Grand Orient Lodge at Charleroi, Pennsylvania, and in September 1903 there were fifteen applicants. About the middle of October a meeting of all the prospective members was held at the Goaziou home and Bro. Muzzarelli told them of the new Co-Masonic Order recently formed in France and that he had the authority to represent that as well as the Grand Orient. All of the applicants had progressive ideas about women and they decided to choose the Order which would admit their wives.

On October 18, 1903 Francois Louis Goaziou and fourteen other men and the next day Mrs. Goaziou and Mrs. Etienne Barthelot were initiated, passed and raised. On October 25, 1903 the first Co-Masonic Lodge in America-Alpha No. 301 of Charleroi Pennsylvania was consecrated.
By August 1904 six more Lodges had been opened, On November 9, 1904 the Rose Croix Degrees were communicated to Bro. Goaziou and he was made a member of Rose Croix Chapter No. 1 of Paris. In 1905 the first Chapter was formed in the Valley of Charleroi with 26 Charter members. On December 28, 1905, Francois Louis Goaziou became a member of Areopagus No. 1. Camp of Paris, and Alpha Areopagus No. 41 was formed at Charleroi.

On November 7, 1908, the American Federation of Human Rights was formed and Francois Louis Goaziou was elected its first President. On November 21, 1909 he received appointment as Representative of the Supreme Council for the American Federation of the International Order of Co-Freemasonry “LE DROIT HUMAIN” and on the same day the Consistory Degrees as well as the 33 Degree and last Degree of the Scottish Rite were conferred upon him.

In 1940 Mark Masonry and the Holy Royal Arch of Jerusalem were added to the degrees worked.
Today, the American Federation has several lodges and advanced bodies all across the United States. We continue to support new study groups and triangles.