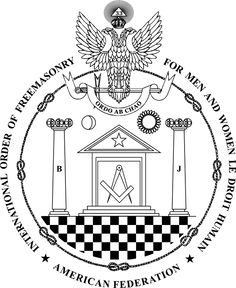 Amen-Ra Lodge #584 was founded in July 1943 by members of Sirius Lodge #556 in Illinois, who were also members of the Theosophical Society.

The name Amen-Ra was chosen as a result of studies of ancient Egyptian history of the pharaohs, Amen-Ra being the son of Amon who was thought to be a god.

In the beginning, meetings were first held at the home of a member, in a room above a bowling alley, at a church, in a kitchen and at the Oddfellows Hall.  Eventually, we found our current meeting place in the hall of the Elks Club in Waukesha Wisconsin..

Amen-Ra members held strong during trying times of change and growth. For several years four of us kept the lodge active until our membership grew.  During this time, Sirius lodge members assisted us with ceremonies.   We now average twenty members at any given time.  And we were happy to host, along with Sirius Lodge, the Le Droit Humain, American Federation Convention at the DeKoven center in Racine, WI in 2005, 2008, 2010 and again in 2018, where we celebrated our 75th anniversary!

Poets use words and freemasons use rituals
Just like Strength and Beauty complement each other
Amen-Ra lodge is our Great Mother
She shines bright and welcomes all who seek more light.
Our order is called Le Droit Humain and we make it very plain
Discrimination of any kind is an offense against humankind.
Amen-Ra lord of Truth, Creator of life with the greatest humility
And with her heart full of love under the heavens dome
I go on my knees and chisel my stone.
From the Source, through the Cosmic Halls come twinkling seeds
Of both karma and love embedding themselves in earth, sky and sea
And so then Brethren come, we...
Just as the flower opens petal after petal from its sound of the expanding
seed calling forth nature spirits to assist its opening to its individual beauty;
so the Lodge opens officer after officer from Wisdom to Strength to Beauty
creating a Temple of Light and Love.
We sought a deeper meaning; we found Amen-Ra, The Hidden Light.